EL PASO, Texas -- On the field that they used to play on less than ten years ago, El Paso's native sons Aaron and Alvin Jones hosted their annual Youth Football Skills Camp at Burges High School on Thursday.

For the fourth time in five , Green Bay Packers star RB Aaron and current NFL free agent Alvin welcomed hundreds of kids from grades 3-12 to Burges to participate in drills, competition, and gain instruction from numerous college and professional players.

This year's camp however held more significance than ever, as it comes three months after the death of Aaron & Alvin's father, Alvin Jones Sr. Alvin Sr. passed away unexpectedly in early April.

In speaking with the media, both Aaron and Alvin spoke extensively about how the camp was always special to Alvin Sr., as it was something that helped keep Aaron and Alvin grounded to the community that raised them.

"He's the reason we started doing these camps," said Aaron of his father. "Giving back, him and my mom. So it's definitely special."

"This is what he took pride in, putting the camp together," added Alvin, who talked about how this year's nearly didn't take place after Alvin Sr.'s death. "At first we weren't going to have one, but then my mom asked 'When's the camp?' So we were definitely having one."

Alvin Sr. was always a constant presence at Aaron and Alvin's games from Burges to the NFL, and the return to Burges today brought back memories of their strong father-son bond.

"I remember scoring so many touchdowns on this field...my dad being back there blowing up the inflatable before the game," said an emotional Aaron. "There's nothing being back at home, being back on your home turf, bringing the kids out here having fun with them."

Joining Aaron and Alvin at the camp were a number of professional and college football players. Former UTEP teammates Nik Needham, now with the Miami Dolphins, and defensive lineman Roy Robertson-Harris, fresh off a lucrative contract with the Jacksonville Jaguars, joined in to give instruction.

Current UTEP players, including running back Deion Hankins and defensive back Justin Prince, were also on hand to give their time. 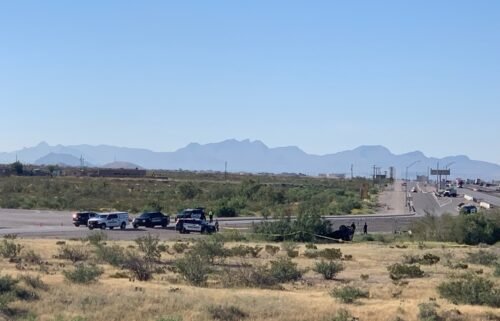